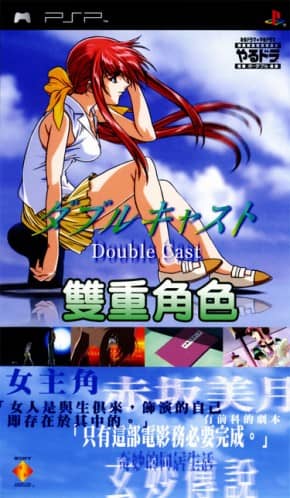 Yarudora Portable: Double Cast is an Adventure game published by Sony Interactive Entertainment released on July 28, 2005 for the PlayStation Portable. The English patched version of the PSP game is released by Cargodin.

The game begins with you, the main character, waking up at a fountain to the face of a pretty girl. You are a high school boy, and this girl has helped you out of the garbage where you had passed out in a drunken stupor. (Talk about first impressions!) As it turns out, she cannot remember anything about herself except for her name, Akasaka Mitsuki. Since she has no place to stay, you offer your own, and so begins your unusual relationship with this spirited girl. When your film club finds itself in need of a female lead, Mitsuki joins in, and from there the main story begins to unfold.

This is the first entry in the ambitious YaruDora series, produced by Sugar&Rockets and Production I.G. If you have played Steins;Gate Elite, this is the series that inspired the fully animated approach.